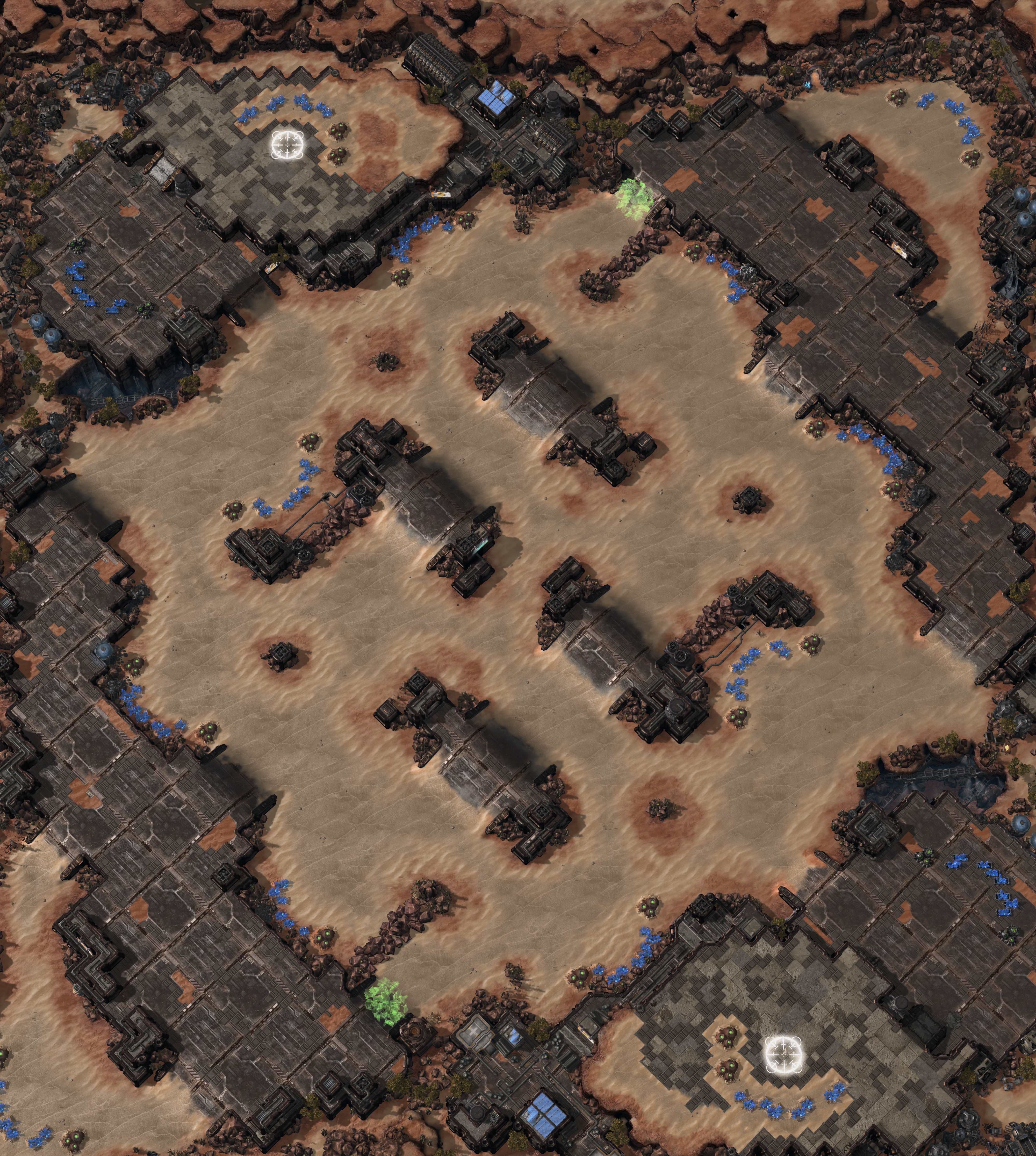 Samarra is a 2 player’s map with the general idea of a mildly open central arena with two optional highground side pathways for harass squads or flanking groups. The center arena has four diagonal and parallel small highgrounds which are designed to create small tactical hotspots. These hotspots strengthen terrain control units considerably, and because of this it is very easy for the center of the map to become locked down from both sides, this forces army movement in the later stages of the game towards the edges map creating new challenges for players as they try to secure and defend the bases around the borders of the arena and later the corners of the map.

I as a mapmaker have always loved the idea of trenches and how in real wars soldiers can create new terrain advantages. For StarCraft this is not really possible, and not only because of game/engine limitations, but because of what StarCraft is about, the last thing the big majority of players want is have to sit down for maybe hours to watch two deeply entrenched players “Wait it out”. Yet, it still is very attractive to create something that plays so much with “the forbidden”.

Center of the map

Third base and Half Base.

Buildable area behind the Natural.

Samarra’s design not only tries to play with ideas of entrenchment, but it also does with the general feeling of army movement and how openness is defined. When playing Samarra players will find themselves that even when the map feels and maybe looks open, because of the way the central high grounds and choke points are placed the apparent map’s central arena openness isn’t as big as it would look at a glance.

One of the defining features of the map is the inverted mineral line of what would normally be the fourth base. Because of the way this base is placed it creates a considerable amount of pressure on the player holding it to be aggressive toward’s the enemy’s Third, this Fourth base can be seen fairly often been taken by Terran players that want to put heavy Bio pressure on Zerg and sometimes even Toss players, but there are many other situations where Toss or Zerg will also want to take the exposed Fourth to put pressure on the enemy side.

The aesthetics of Samarra are based on a Mar Sara setting influenced by a bit of Middle Eastern history.

Tournament games played on the map

Changelog of the map

V 1.30
♦ Added unbuildable Bricks at the bottom of main base ramps (Upss).

No votes yet.
Please wait...